So what is the difference between a character with a weak pose
versus one with a strong pose? Is it good body proportions?
Proportions do play a small part if they feel unbalanced, but one
look at Mike & Sully from Monster's Inc., Mr. Incredible from
The Incredibles, Po from Kung Fu Panda, and so many other iconic
characters, including Stu with his medicine ball sized head, will
tell you that even the most oddly proportioned characters can have
surprisingly awesome poses.

So then, could it be drawing style? I know a lot of people feel
that if they could only draw better, their drawings would have
stronger poses and more dynamism to them. But to be honest, that's
actually a very misguided thought. Good drawing skills will help of
course, but someone could draw the most detailed and lifelike
character ever, but still miss that "spark" of motion, whereas the
person next to him could draw a simple gesture drawing that
instantly catches your eye and makes you feel that it's more than a
bunch of lines on paper. Knowing how to draw out a perfect human
figure will only get you so far if you don't know how to give it
that spark.

What really gives a drawing a strong, dynamic pose is its line of
action (silhouette and composition also play a role in this, but
that's a tip for another week). What is a line of action, you ask?
A line of action is the imaginary line running through a character
that describes the direction and motion of his body and is the
leading force of a character's action. For example, in this page
of Preston Blair's book, Cartoon Animation, 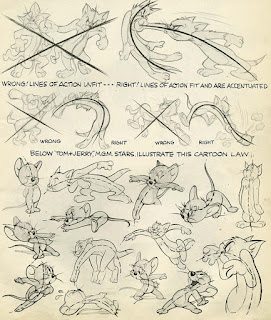 you can see how a good line of action in a pose directs the body
movements into a clear arc whereas a bad one, or none at all feels
weak and lacks energy, and even life. You can also see that a line
of action doesn't have to run through the body from head to toe. It
can go from hand to foot, skipping the head entirely, from head to
butt without ever going through the legs, and many other variations.
This is because the line of action isn't locked onto a certain part
of the body, but flows through the action of what your character is
doing, be it a full-bodied punch, sitting at a cafe, or just a simple
standing pose.

Now that we have a better idea of what a line of action is and what
it does, we can talk about the different types used in drawings. When
it comes to the types of shapes used in lines of action, it can
basically be broken down into 3 types; the C, reverse C, and S curves.
You'll find that no matter what the line of action is describing, it
will almost always be one of those shapes in varying extremes. Sometimes
they will be bent so much that they look like a U shape, or so straight
that they look like a bent l, but they are still considered to be one
of those 3 types.

But what, some people might wonder, do we do with all those extra body
parts that aren't being used in our character's line of action? Won't
they get in the way or break the line of action we tried so hard to build?
The answer is that they can, but the trick is to use the extra limbs to
compliment your line of action with secondary lines. These are just like
your main line of action, only they don't lead the action, but draw the
viewers eyes to the main action. As an example, we'll use some of my old
Class 1 sketches; 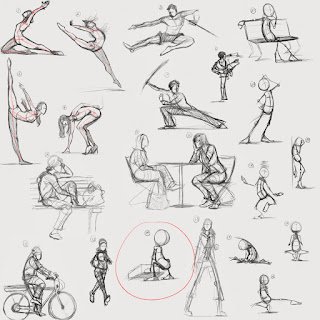 As you can see, each pose has a line of action running through the body,
and the limbs, even though they aren't part of the main line, either flow
with it or contrast it to help give variety and dynamism to the pose. What
you want to avoid though are lines that break your line of action, like
in the Preston Blair example. Limbs that jut out in odd directions or go
against the overall flow of the action too harshly will break your pose
and make it look weak.

Lines of action are somewhat tricky to get used to. In the beginning, it
may feel more comfortable winging your drawings instead and hope a line
of action will appear. But a drawing without a solid force flowing through
it will not be able to express the energy, motion, and life that is so
needed in animation. So always try to plan your actions. Study references,
go out and do life drawings, and analyze people for the line of action
running through every person's actions. It will definitely help improve
your drawing skills, and by consequence, help make your animation
poses stronger.

Thank you for taking the time to read my post. I hope it's been helpful, and
if you have any questions or suggestions, you're always more than welcome to
leave a comment or send us a message on AM.
Ramblings of Cameron Pratt

The Mad Duo of T&T