We'll begin with a few questions. What is it that makes a good silhouette,
and why do we even need it? The pose should work with or without, seeing
as how it still has all its arms and legs, right? The fact is that your
poses can still "work" without a good silhouette, but they'll be very weak
and it will be unclear what's happening. What a good silhouette does to
your pose is it makes it stronger, instantly readable, and more appealing
to the viewer. Being able to instantly know what a character is doing,
even if you can't see anything apart from a solid mass is extremely
important to creating good animation.

Here's an example, showing a pose both normally and in silhouette. As you
can see, even without the line art to show you what's happening, you can
instantly tell that it's a Sherlock Holmes-style detective. (The images
used here are taken from this FloobyNooby post that you may remember,
FloobyNooby - Line of Action. They only go over silhouette in passing,
but make sure to check out their post!)

So now that we know why we need a silhouette in our poses, what can we do
to improve them? Here are a few tips and tricks that I find really help
getting the most out of your silhouettes.

This one may seem like an obvious one, but you'd be surprised how often it
gets overlooked and also misunderstood. Having a clear silhouette doesn't
mean that you have to be able to clearly see every limb on the body. If
that were the case, posing a character would be extremely limiting and you
would have arms and legs sticking out everywhere.

A clear silhouette means that the action and meaning of the pose reads
easily. Like in the above image, Daffy's right arm is almost completely
hidden in the silhouette, but you still know exactly what he's doing. And
the slight elbow that you can see tells you that his arm is still there.
The most important thing is that you want the entire pose to tell you
exactly what this person is doing. If it can't do that, then the action
becomes unclear and you lose the visual interest.

The next subject is overlapping shapes. As I mentioned in the last tip, it
is okay to overlap limbs and bodyparts as long as you don't lose the
clarity of the pose. But you also need to watch out for a few things when
doing this. One of the biggest problems you want to avoid is overlapping
so much that you lose a limb entirely. This can cause your character to
look like his limb is missing instead of overlapped. You also want to pay
special attention to the arms and legs. Because of the way the bend, arms
and legs have a tendency to overlap in a way that they end up blocking
themselves (for example, with an arm bent sharply, the upper arm can
easily block out the lower arm or vice versa). Ideally it's best to be
able to see both the upper and lower portions of the arms and legs, even
if it's only slightly, to keep them from looking stumpy.

Now that we've talked about overlapping shapes, it's time to discuss
overlapping joints in silhouettes. This is something you want to try and
avoid happening in your poses. By having the joints of your character
overlap, for example the elbows, it makes it so that you can't tell which
hand belongs to which arm. You can have them overlap slightly, but it
doesn't take much for the joints to blend into each other and cause a mess
of confusion in your poses. 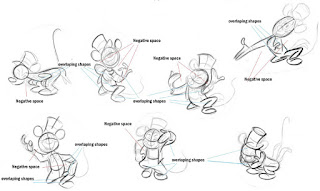 Our last subject isn't actually about the silhouette, but about the space
that surrounds it. Negative space, or the empty space around your
character, is very important to your posing. Having a variety of empty
spaces between the arms and legs, as well as a nice contrast of large
spaces and small spaces helps to build a dynamic silhouette and keeps the
pose visually interesting. Like posing though, you need to make sure to
avoid twinning in your negative space. You can see some good examples of
this subject in the image above.

And that's all I have for you this week! Thank you for taking the time to
read my post. I hope it's been helpful, and as always, if you have any
comments, questions or suggestions, you're more than welcome to send either
Beau or me a message on AM.
Ramblings of Cameron Pratt

The Mad Duo of T&T